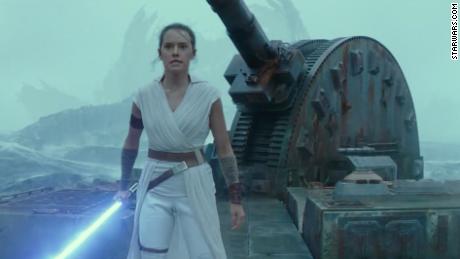 Meanwhile, a new official Star Wars video that's been circulating after having been posted to the franchise's YouTube page has set the internet abuzz with a new rumor about the film - the beloved Ewoks, it seems, may be teed up for their first return to the movie franchise since appearing in the original trilogy.

One terminal hospice patient whose dying wish was to see the upcoming "Star Wars: The Rise of Skywalker" sequel with his son, ahead of the film's projected December 20 release date, will see his dream come true, Disney confirmed on Thanksgiving. Many social media users tagged the film's director, J.J. Abrams, and actor Mark Hamill.

Bob Iger, Disney's Chairman and CEO, tweeted on Thursday that the company would allow the patient a preview: "On this Thanksgiving, we at @Disney are grateful to be able to share #TheRiseOfSkywalker with a patient and his family @RowansHospice. May the force be with you and with us all!"

Lisa Davies, who was the a healthcare worker that made the request know to those at Rowans Hospice, shared her feelings of the great news.

He told Press Association: "I just want to say the biggest thank you to everyone that has helped to make this happen".

"His wish is to see the final Star Wars film #RiseOfSkywalker with his young son".

As they say, May the force be with you!

'During what is just a awful situation to be in, you have helped to make some wonderful memories and bring some joy to my family.

The hospice said that on Wednesday, a man from Disney delivered a laptop to them with the movie on it. This is indeed a thoughtful gesture by Disney and Lucas Films for making this die-hard Star Wars fan's dream come true.

"I still can't believe it - the only way I can describe it is that I feel like I have won a million pounds".

"We are truly humbled by everyone's support".

His wife also took the time to thank Disney as well, calling the response to their wishes "truly mind-blowing".

'From a simply conversation, to witnessing the out pouring of generosity has been unbelievable. But for one massive Star Wars fan, counting the days to the blockbuster epic wasn't a luxury he could realistically wait for. Staff threw a Star Wars themed party for the patient and his family.